Technology is playing a bigger role in families lives. This exposes them to inherent cyber risks that they haven’t faced before...

Technology touches everything we do. It improves the way we communicate, collaborate, and transact.

As a result, our lives have shifted online, especially since the advent of smart phones. Many of the daily tasks we used to do offline – banking, shopping and even socialising – we now do online. Data shows just how integral the online environment is to us. According to statistics*, 88 per cent of the Australian population, or 22.3 million people, use the internet.

Our dependence on the internet, and the exponential growth of web-enabled devices and social media, has had the effect of making us so much more interconnected. In fact, a whopping 18 million of us~, or 71 per cent of the population, use social media. But technology also creates new risks. It provides fertile ground for criminal activity and antisocial behaviour.

Research backs this up. From 1 July 2019 to September 2019 this year the ACSC’s cybercrime reporting tool, ReportCyber, received almost 14,000 reports^. That’s an average of around 148 reports a day, or one cybercrime report every 10 minutes. Over this time, individuals and small to medium businesses self-reported financial losses to ReportCyber of more than $890,000 each day, representing an estimated annual loss of approximately $328 million~.

So what is Cybercrime?

Cybercrime involves the use of computers or
other digital devices to perpetrate an offence.
It includes: 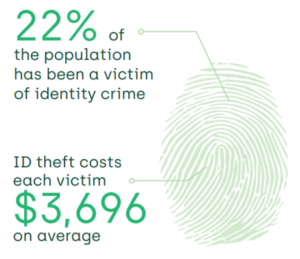 This product includes cover for the impacts
of cyber events and cybercrimes such as:

Daniel received an email on his computer allegedly from a popular social media platform stating he needed to verify his account by clicking on the provided link.

Daniel clicked on the link, and a couple of days later he was unable to log in to his social media accounts.

As it turns out, Daniel had downloaded malware onto his computer that allowed a cybercriminal to steal Daniels’ personal information and identity.

Provides cover for cyber event response costs to remove the virus, restore data, and secure the home IT. The policy would also provide identity theft response costs to help the policyholder re-establish their identity and essential records. If Daniel had to take time off work to rectify his personal records and lost wages as a result, he could be entitled to wage replacement benefits as part of his claim.

Jess just started high school. Within the first few weeks, she became a victim of bullying. It started out as a few comments, however quickly escalated to repeated harsh and vile comments on all of her social media profiles.

The online bullying had a significant impact on Jess and led to her not wanting to go to school and a deterioration in her grades.

Provides cover for a policyholder and their spouse to attend critical guidance sessions if their child is subjected to cyber bullying. In this case, these sessions would help Jess’s family work through this ordeal and better deal with any future instances of cyberbullying.

The policy would also cover the costs to try to remove the hurtful comments.

The policy would also provide a wage replacement benefit if the parents have to take unpaid time off work to attend guidance sessions or to meet with the school or other authorities to deal with the incident.

PROTECT YOUR FAMILY WITH A PERSONAL CYBER POLICY TODAY.

We draw your attention to our FSG which provides you with further information on our services.

Please note that the information contained is General Advice only. General Advice is advice that has been prepared without considering your current objectives, financial situation or needs. Before taking any action, you should consider whether the general advice contained in this communication is appropriate to you having regard to your current objectives, financial situation, circumstances or needs, and seek appropriate professional advice if you think you need it. If the advice provided relates to the acquisition or possible acquisition of a new insurance policy and the insurer has prepared a Product Disclosure Statement (PDS) we will have attached the PDS for your review. You should consider the PDS prior to making the decision to purchase this product.

Warren Saunders have been our trusted broker and advisor for as long as we can remember. They look after the insurance for all elements of our business and we couldn’t be happier with the level of service we receive. We have complete trust in them and really value their extensive knowledge, expertise and professionalism. Over the years WSIB have supported us through several claims from small to large, all of which resulted in better than expected settlements. The way they advocated for us and kept us up to date every step of the way was appreciated. This service is a huge part of what we believe makes them such a great broker. We would highly recommend Warren Saunders Insurance Brokers.

Warren Saunders has been a trusted advisor to COPE Sensitive Freight for many years now. Working with our diverse team, from front line administrators up to senior managers, they assist us to navigate the complexity of various insurers across the different States in which we work. Their professionalism ensures we get the best outcome at premium renewal time, which enables us to project future costs and savings opportunities and so we can strategise for opportunities to improve.

Utilising their case management services, we can be on the front foot with our insurers to ensure each and every case is appropriately managed throughout the year, not just at premium renewal time. With Warren Saunders, we feel like we have a solid business partner, big enough to represent us and small enough to have the personal touch.

Our partnership with Warren Saunders began when we opened for business in 1986. During this longstanding relationship we have been nothing but impressed with the level of service and expertise they have provided us across all areas of General Insurance and more recently, Workers Compensation. One of the things we love about working with WSIB is that we are valued as a client and treated as more than just a number. We are personally looked after by one of the Directors. He and the whole team go above and beyond to ensure our needs are met, whether it be a renewal, a claim or a last minute query they are there and able to deliver.